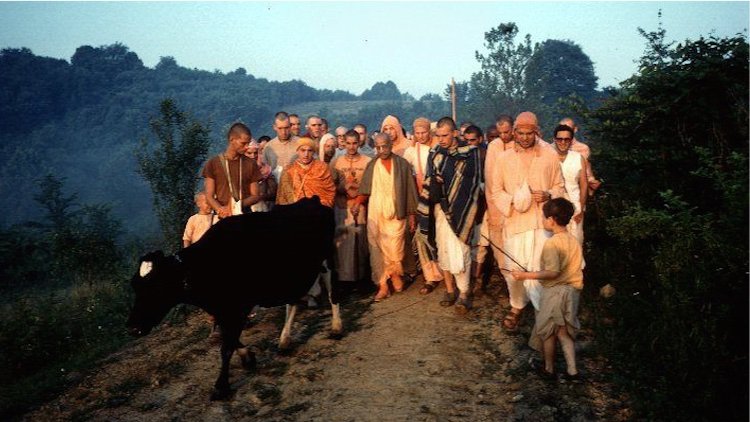 His Divine Grace A.C. Bhaktivedanta Swami Prabhupada (1896-1977) is widely regarded as the world’s pre-eminent exponent of the teachings and tradition of Bhakti-yoga, the practice of loving devotion to God, to the Western world.

A.C. Bhaktivedanta Swami Prabhupada was born Abhay Charan De on September 1, 1896 in Calcutta, India. From birth, Abhay was raised in a family devoted to Krishna (whose name means the all-attractive, all-loving Lord). As a youth he became involved with Mahatma Gandhi’s civil disobedience movement. However, it was a meeting with a prominent scholar and spiritual leader, Srila Bhaktisiddhanta Sarasvati Prabhupada, which proved most influential on young Abhay’s future.

Upon their first meeting in 1922, Srila Bhaktisiddhanta, who represented an ancient tradition of Bhakti-yoga, asked Abhay to propound the teachings to the English-speaking world. Deeply moved by Srila Bhaktisiddhanta’s devotion and wisdom, Abhay became his disciple and dedicated himself to carrying out his mentor’s request. But it wasn’t until 1965, at the age of seventy that he would set off on his mission to the West.Abhay Charan, now known as Bhaktivedanta Swami (an honorary title awarded by his peers), was given free passage aboard a cargo ship to New York. The journey proved to be treacherous, and he suffered two heart attacks while on the ship. After 35 days at sea he finally arrived at a lonely Brooklyn pier with just seven dollars in Indian rupees and one crate of his translations of sacred Sanskrit texts.

In New York he faced great hardships, and was regularly without money and a steady place to live. He began his mission humbly, giving classes on the Bhagavad-gita in lofts in the Bowery (New York’s infamous skid row), and leading kirtan (traditional devotional chants) in Tompkins Square Park. His message of peace and goodwill resonated strongly with the hippie community and younger generation, some of whom came forward to become serious students of the Bhakti-yoga (loving devotion to God) tradition. With the help of these followers, who affectionately began calling Bhaktivedanta Swami “Swamiji,” a small storefront was rented on New York’s Lower East Side to use as a temple. In July 1966, After almost a year of adversity and struggle, Swamiji established the International Society for Krishna Consciousness for the purpose of working for real unity and peace and reinstating proper values in the world.

He taught that each soul is part and parcel of the quality of God and that one could find true happiness through living a simpler, more natural way of life and dedicating one’s energy in the service of God and all living beings.Having begun initiating his New York followers into the Gaudiya Vaishnava lineage (the line of Bhakti-yoga stemming from the 16th century saint Sri Krishna Caitanya), Swamiji next travelled to San Francisco. Amidst the emerging hippie community in the Haight-Ashbury district, during 1967’s “Summer of Love,” he taught that the experience of devotion through Bhakti-yoga was a spiritual “high” superior to any pleasures derived from material sources such as wealth, fame, or intoxication. In the following months, many more people came forward to study under him and assist him.

Desiring to address him with the respect due to a revered spiritual teacher, his disciples began to call him Srila Prabhupada, meaning “one at whose feet the masters sit”.In the eleven years that followed, Srila Prabhupada circled the globe fourteen times, bringing the teachings of Bhakti-yoga to many thousands of people across all six continents. Men and women of all ages and backgrounds accepted his message and integrated the teachings into their lives. With his disciples’ help, Srila Prabhupada established centers and projects throughout the world, including temples, rural communities, educational institutions, and what would become the world’s largest food relief program (which happens to be vegetarian). Srila Prabhupada returned to India several times where he sparked a revival of the Bhakti-yoga tradition and opened many temples, including important centers in the holy towns of Vrindavana and Mayapur.Srila Prabhupada’s most significant contribution, however, is his books.

He authored over seventy authentic volumes on Bhakti-yoga, which are highly respected for their authority, depth, clarity, and fidelity to tradition. His writings have been translated into seventy-six languages and are used as standard textbooks in most colleges around the world. His most prominent works include:Bhagavad-gita As It Is, the thirty-volume Srimad-Bhagavatam, and the seventeen-volume Sri Caitanya-caritamrita. To see the list of all books toggle “Books by Srila Prabhupada”.A. C. Bhaktivedanta Swami Prabhupada left this world on November 14, 1977 in the holy town of Vrindavan. 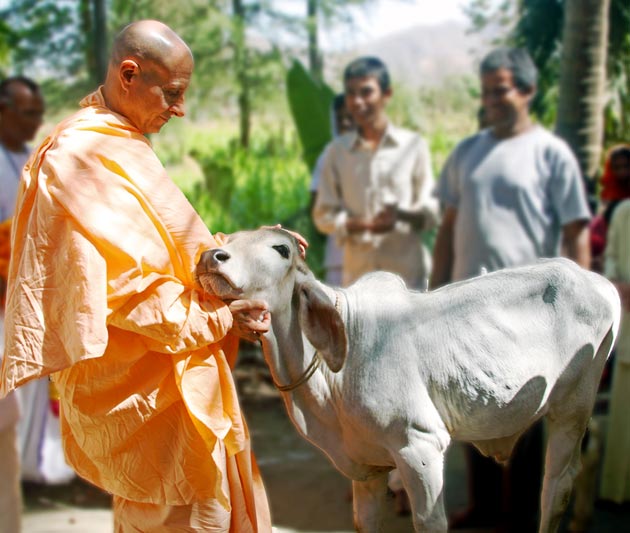 As a young seeker, Radhanath Swami, then Richard decided to give up meat from his diet after an affectionate experience with a cow. Since then, his love for cows has been growing and the Goshala is Govardhan Eco Village is a manifestation of this love. He suggests that cows should be just loved and not for ghee, milk, urine or dung. He has written two books, The Journey Home and The Journey within, which are International best sellers. He has inspired a community of more than 12,000 people in Mumbai and several thousand people across the globe to take up a life of sanctity and devotion. He has inspired following projects in India, Govardhan Eco Village, Bhaktivedanta Hospital, Gopal Garden’s High school, Barsana Eye camp, VOICE, Annamrita Food Relief Society, Venu Madhuri and Gita Champions league, and each one of them is an emblem of applied spirituality.

In recent years, Radhanath Swami has also become a regular speaker at Harvard, Stanford, Oxford, Cambridge, Columbia, SOAS, and NYU, along with other universities in the US and UK. His 2011 public discussion with Cornel West at Princeton, entitled “East Meets West: Hindu and Christian Perspectives on God, Love, and Spiritual Activism,” perhaps most aptly represents his contribution to global spirituality and compassion.

To make our cows happy and loved by providing the highest protection, care and natural living.

Stay up-to-date and get our latest news by email.